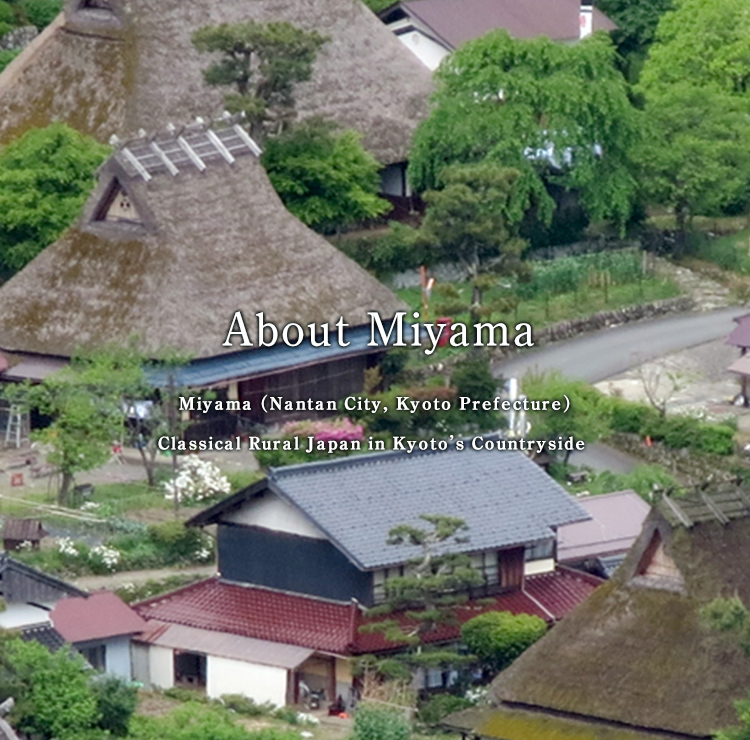 Authentic scenery of thatched roof houses is a symbol of Miyama.
The landscape of thatched roof houses in mountain villages in Japan indicate the ecological way of life of Japanese people in earlier ages. From ancient times, people were using natural resources around them whilst taking care to manage and preserve them. Well maintained cedar tree forests, vegetable fields, flowers in gardens, waterways, rice fields and foot paths between rice fields, all represent a lifestyle that has continued for countless generations in Miyama.
The thatched houses in Miyama made of wood and thatch are 100 to 200 years old. Most notably, the designated national heritage, the Ishida Heritage House was built back in 1650, 370 years ago, and is the oldest farmhouse known in Japan. Together with abundant nature in which all manner of flora and fauna flourish, houses made only in natural resources best fit the climate of this country and create a nostalgic rural Japan landscape in this region.
Interactions with locals are inevitable experiences to understand farming village cultures in Japan. You may experience: eating traditional local foods, one night stay in Ryokan (traditional Japanese style inn), and even invited to private home of locals. We offer various packages depending on your interests. If you would like to explore the region where you can meet the classic rural Japan, we strongly recommend you to come to Miyama Town! 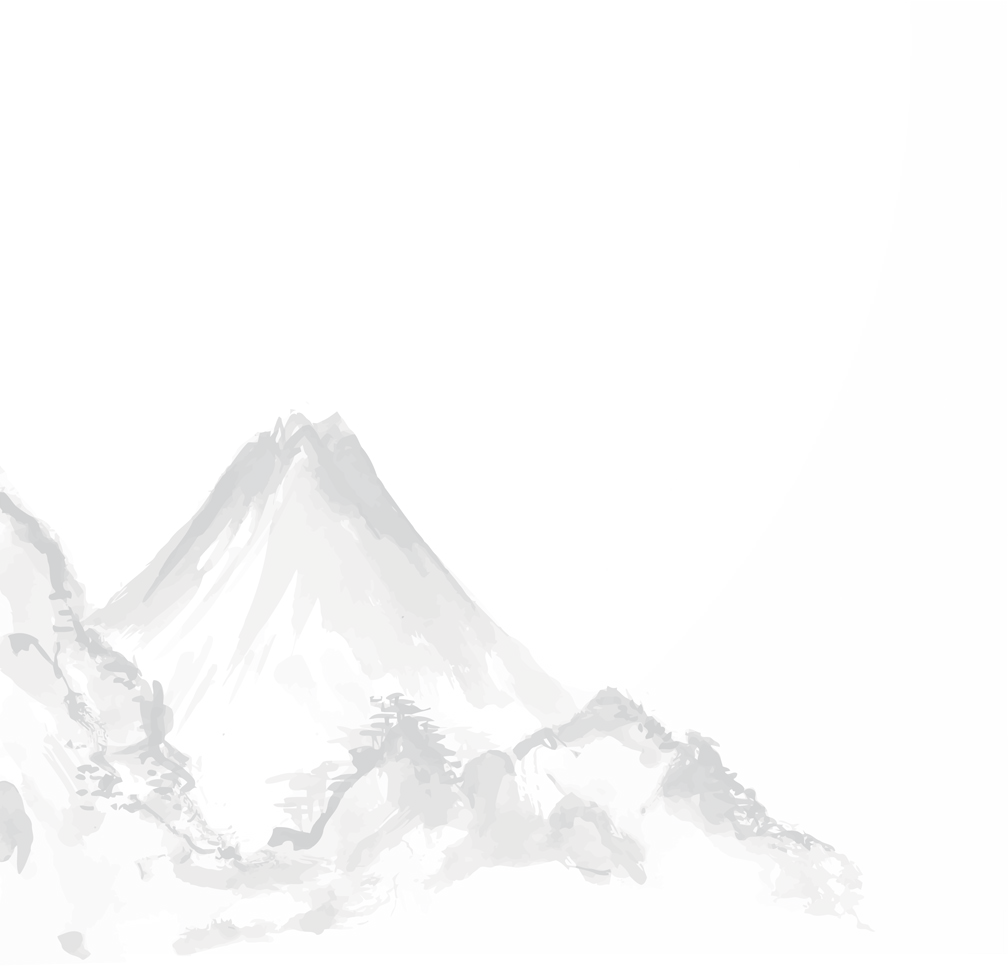 Miyama Town is located in the center of Kyoto Prefecture. The total area of Miyama Town is 340.47 square kilometers. It is a part of Nantan City and the size of Nantan City, along with Sonobe Town, Hiyoshi Town Yagi Town, is 616.3 square kilometers. Nantan City is the second largest city (next to Kyoto City) in the Kyoto Prefecture.
Located in the north area of Kansai (Osaka, Kyoto, Nara, Hyogo, Shiga, Wakayama and Mie), Miyama Town is about 55km north of Kyoto’s city center (90 minutes by car or 110 min by using public transportation), and about 50km south of Obama City in Fukui Prefecture on the coast of Sea of Japan (60 minutes by car).

96% of Miyama Town consists of forests at a height of 223 meters above sea level. The town is surrounded on all side by mountains, namely Mikuni Dake (959 meters high), Choro ga Dake (at 917 meters high), Toukin Zan (871 meters high) and Hachigamine Yama (800 meters high). Pristine waters of the Yura River sourced from Ashiu forests (a research station of Kyoto University’s Field Science and Education Center) flow through the heart of Miyama. Close to the banks of Yura River including its side streams, all of 57 hamlets in Miyama Town are spread out.
(an entire population of Miyama Town is approximately 4,000).
In December 1993, Kitamura (North Village), a hamlet with cluster of thatched roof farmhouses, was designated as the national preservation site (Kayabuki-no-sato). On 25th of March, 2016, the large tract of Tamba Highland in the central part of Kyoto Prefecture, including entire area of Miyama Town, was designated as Kyoto Tamba Kogen Quasi-National Park

Japan has distinct four seasons. This is particularly obvious in Miyama. In spring, people feel a fresh breath of life as various mountain vegetation begins budding and cherry blossoms and various spring flowers bloom. In summer, surrounded by deep green trees, sweet fish and children swim in pristine river waters. In autumn, the leaves of deciduous trees turn to red, yellow and brown, painting the mountains beautiful colors. Japanese have developed their collection of traditional colors, known as dentouiro. Most of names of those colors originate from flora and fauna.
The snowfall starts from mid-December. Snows mostly remain without melting after New Year ’s Day and the area is covered in snow from late January to February. In this season, the Thatched Village (kayabuki-no-sato) snow lantern festival is held. The stunning beauty of the monochrome landscape is refreshing despite the inconveniences caused to local resideurs by accumulated snow.

Sprit of thankfulness to the gods

In spring, mountain workers (hunters, woodcutters and charcoal burners) greet gods of the mountains and pray for safety before they enter into allowing them to the mountains and, in early winter, they celebrate and tribute to the gods to thank them for finish their work uneventfully. In May, farmers hold rice planting festivals (Otaue sai) with maiden planters dressed in colorful garments to celebrate the arrival of gods of the fields from the mountains and pray for a rich harvest. It is believed that every living thing in nature (e.g. fire, water, trees, rocks or flowers) contains kami, or gods in Japan. Praying and giving thanks to multitudinous gods are embedded in the Japanese way of life and moral code, and is indistinguishable from Japanese social and cultural values.
In Miyama, you will find each hamlet have own shrines and temples. Putting your hands together to pay respect, you feel gratitude to everything surrounding you.
Depending on the time you visit Miyama, you may watch some of those festivals. Matsuage Festival is held every year on 24th August to pray for prevention from fires in mountains. Gion Kagura in Tauta area in July is the festival to pray for fertility and family prosperity and state of perfect health.

Much of the work in Japanese mountain village is cooperative and communal, such as planting and harvesting rice, building houses, replacing of thatch roofs, etc. A true community-wide spirit of cooperation has existed for long period, which is called Tengori (the spirit of “help and support each other”) lifestyle. Villagers feel happy to share their benefit among all members of community. The Birth of baby and wedding have been celebrated by everyone in the village and, mourning, such as sorrows of death, sickness, damage from natural disasters etc. were shared and mutually supported with in the community.
Through living in severe nature, the locals have learned no one can live alone. When you visit Miyama, please meet and communicate with locals. In Miyama dialect, “thank you” is “okini” and “see you” is “hona-sainara”. Try to use them! 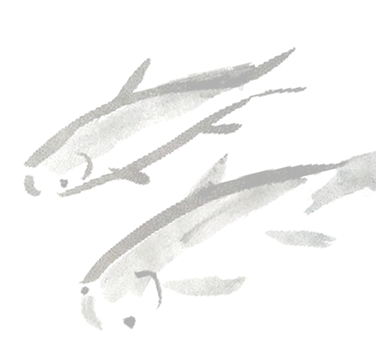 Located at 50 kilometers south from Obama (Fukui prefecture), a port city on the Sea of Japan, and 50 kilometers north of Kyoto City’s central, fusion cuisine culture of edible mountain foods and sea foods from Sea of Japan was born in Miyama. The historical road used by the fish dealers from Obama to Kyoto to sell their mackerel goes right through Miyama for centuries is called “nishi no saba kaido (West Mackerel Road).” Not only mackerels, but various daily commodities were transported via the West Mackerel Road. Most famous Miyama cuisine is “saba zushi” (mackerel sushi) and “nare zushi” (fermented sushi made by pickling mackerel or other fish in rice and salt). Also, people enjoy savoring edible mountain vegetables as well as wild game cuisine such as venison and wild boar. In Miyama, venison is cooked in a variety of cuisines, shigureni (simmered in sweetened soy sauce with ginger), sausage or roasted meat etc.. Wild boar hot pot is considered as the best feast in the winter to thaw out the body.
Further, “rice” is a blessing from nature from a country where the climate and abundant water best suits growing rice. Japan is called Mizuho no Kuni, or the Land of Fresh Rice Plants. Please try the subtle sweetness, and resilient texture of Japanese rice in Miyama. 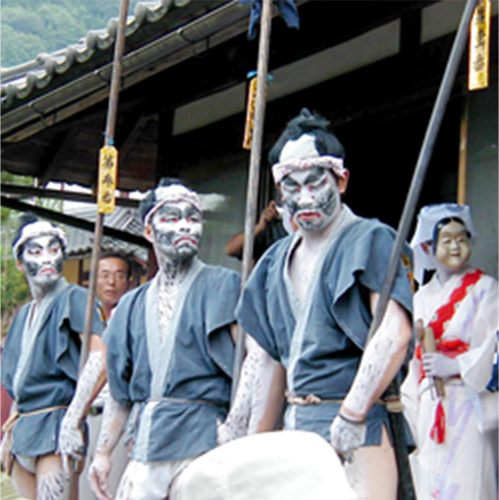 Yasaka Parade Festival (Tauta Festival)
The festival dates back to 1640 and is currently held regularly at the Yasaka shrine (patron god of Tauta hamlet) in order to pray for abundant crops, this offering and performance takes place every July 14th. Three dance and music performances of kagura, sangiri, nigimakura featuring mythical and folk characters like the tengu (long-nosed goblin), oni (ogres), hyottoko (clown-like man), otafuku(plain Jane), jiji (old man), and others are presented as the procession is made. These events serve to not only entertain, but to preserve and protect the traditions of Miyama. 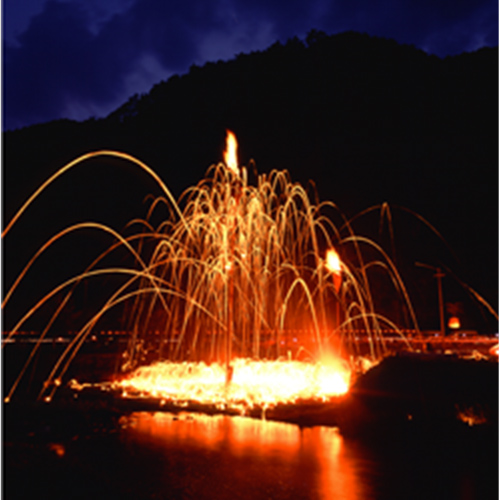 Matsuage Festival
Originating from the fire worship practiced by the Atago faith, this festival is held annually in the evening on August 24th in order to pray that forest fires will not occur in the region. Pine torches are lit and placed in hampers that have been arranged on pillars; these pillars are then knocked down and the rite is concluded. This festival is held at three different locations within Miyama.

Dengaku of Kashiwara (Crow Dengaku)
Dengaku (ritual music and dancing) of the patron god of Kashiwara hamlet, Kawakami Shrine, takes place on the second Monday of October (national holiday) every year. It is also called Karasu (Crow) Dengaku which comes from the unique dance performance of cawing and jumping imitating crows. Crows are considered to be deities which protect people travelling in the mountains. Every year the performance is an appeal to the crows to watch over and help the villagers working in the mountains to return home safely. Simple but classic performance style is considered to have historical heritage value. 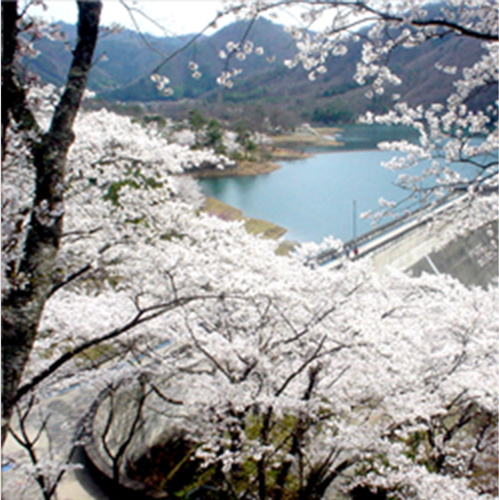 Cherry blossom Festival
The Ono dam park is the site of 1000 cherry trees, and you can enjoy their blossom as you walk around the park. The cherry blossom festival takes place for 8 days period in mid-April. The trees are lit up at night and there are fireworks as well as food stalls. The Sakura blossom sweeps along the Yura River, beginning with Ohno Dam Park in the west in early April and go across its way to Ashiu forest in the east in one week. 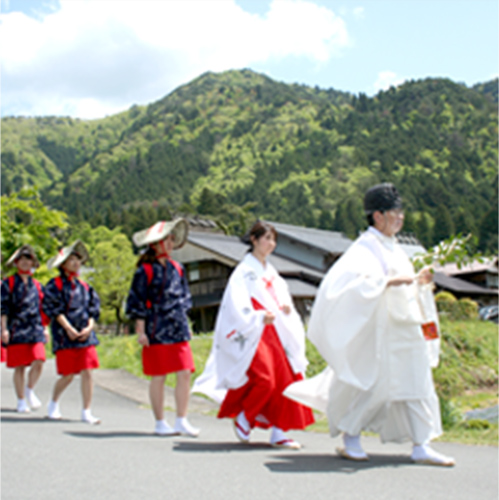 Rice Planting Festival
Every year in May (the rice planting season), this festival is held at Miyama’s Thatched Village (Kayabuki no Sato). After praying for abundant crops at the Hachimangu shrine, the Shinto priest leads a procession of rice-planting maidens to the rice fields where they begin the planting. 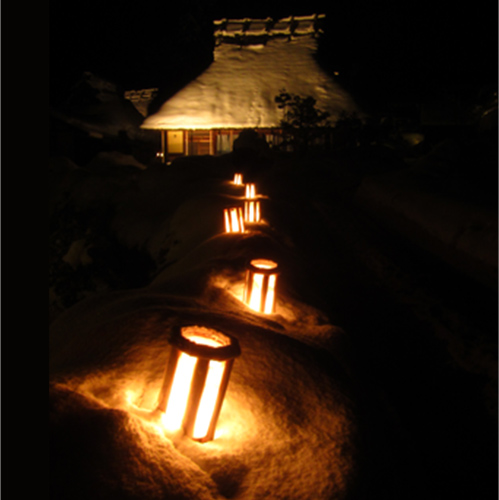 Snow Lantern Festival
This festival is held annually, from the fourth Saturday in January through to the first Saturday in February. You can try your hand at making a snow lantern yourself – the whole thatched village is lit up at night and is especially beautiful adorned with snow. There are food stalls so you can enjoy some local dishes to warm you up while you walk around the village. 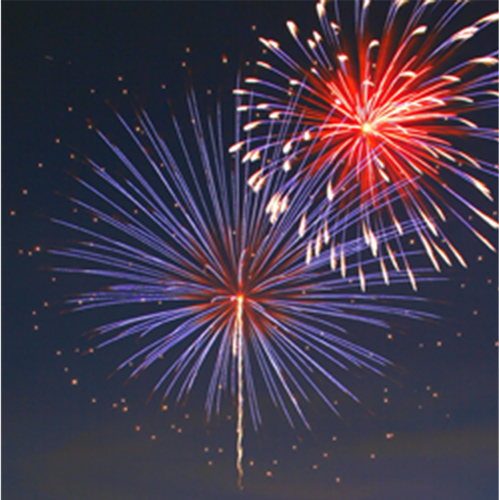 Sweet Fish Festival
This festival is held on Sunday most close to August 15 every year. Sweet fish are a local delicacy in Miyama and at this festival you can catch them by hand from inside a large net that is set up in the river. There is also a traditional folk dance (Bon Odori), fireworks and food stalls in this summer festival. 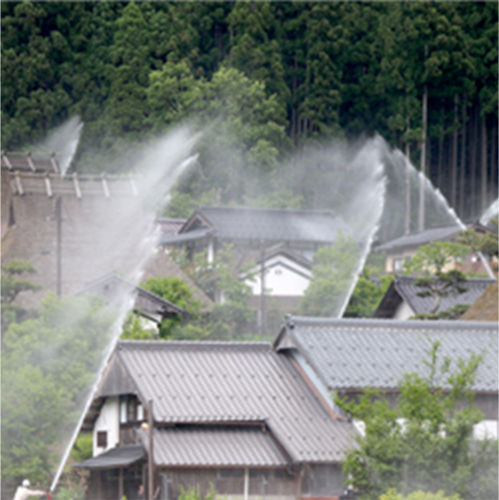 thatched Village Water Hose Festival
As the thatched village is very flammable and a site of cultural and historic interest, it is protected by an elaborate system of 62 hoses that automatically spray water over the whole village if a fire breaks out. Every year, on the 1st of December and the 20th of May, the hose system is tested by the local fire brigade and it’s quite a spectacular sight. The water jets create rainbows over the thatched houses and the festival is always well attended. Spraying starts from 1:30pm and only last for 10 minutes. Don’t be late!
Accommodation
Restaurant
Facility
Things to Do
Access
© 2022 MIYAMAFURUSATO Co., Ltd. All Rights Reseved.
© 2022 MIYAMAFURUSATO Co., Ltd. All Rights Reseved.